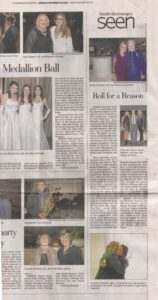 Losing a loved one to dementia is something that the Jameson family wants others to never experience. This fundraiser, inspired by their father Don “D.J.” Jameson, who died of dementia, is held in his honor in hopes that with time and enough research, this disease can be eradicated. Clear Thoughts Foundation in a not-for-profit organization established in Pittsburgh in 2010 with the primary purpose of raising funds to discover drugs and novel therapeutics to stop the progression of dementia and eventually end it.

Their signature casino-themed event, Roll for a Reason, was held on Nov. 17 at the J. Verno Studios in the South Side. It raised more than $125,000 with the help of 350 friends and supporters. Besides black jack and slot machines, guest enjoyed magic by Lee Terbosic, live music by Let’s Duet and performance art by George Williams, whose two paintings raised more than $4,800 during the live auction. “The fundraising success of Roll for a Reason Gala is a remarkable testament to my father and the live he lived. But, bigger than that – as my father would want – it speaks volumes of the generosity of our supporters, who many have been personally touched by dementia as well. It also speaks to the devastation of dementia. A cure must be found for this dreadful disease that sadly is just growing in numbers. A new case of dementia is diagnosed every 3 seconds. More than 50 million people worldwide have dementia and 152 million will be affected by 2050. But, CTF, through our annual Roll for a Reason Gala and our other events throughout the year, is working hard to change those numbers.” said founder and president Hayley Jameson.