The Scientist Behind the Mission

Roya is a neuroscientist with more than 10 years of research experience in the field of neurodegenerative diseases. She has held appointments at the department of Molecular Psychiatry, Neurology as well as Critical Care Medicine at the University of Pittsburgh, School of Medicine.

Roya has been involved in several National Institute of Health (NIH) funded research projects focusing on characterizing novel  biochemical and cellular pathways in models of neurodegeneration, including Alzheimer’s and Parkinson’s disease,  as well as experimental models of brain trauma.

Roya is author/co-author of several scientific peer-reviewed publications and abstracts. She has dedicated majority of her scientific career to research on neurodegenerative disorders and dementia.

Dr. DePasquale’s primary research funded by CTF and CogRx developed experiments to discover drugs capable of treating several forms of dementia with the results being presented at NY Academy of Sciences meeting in April 2015.

Dr. DePasquale’s findings from experiments on how toxic forms of a specific protein called alpha‐synuclein can interfere with the normal function of brain cells grown in a dish. 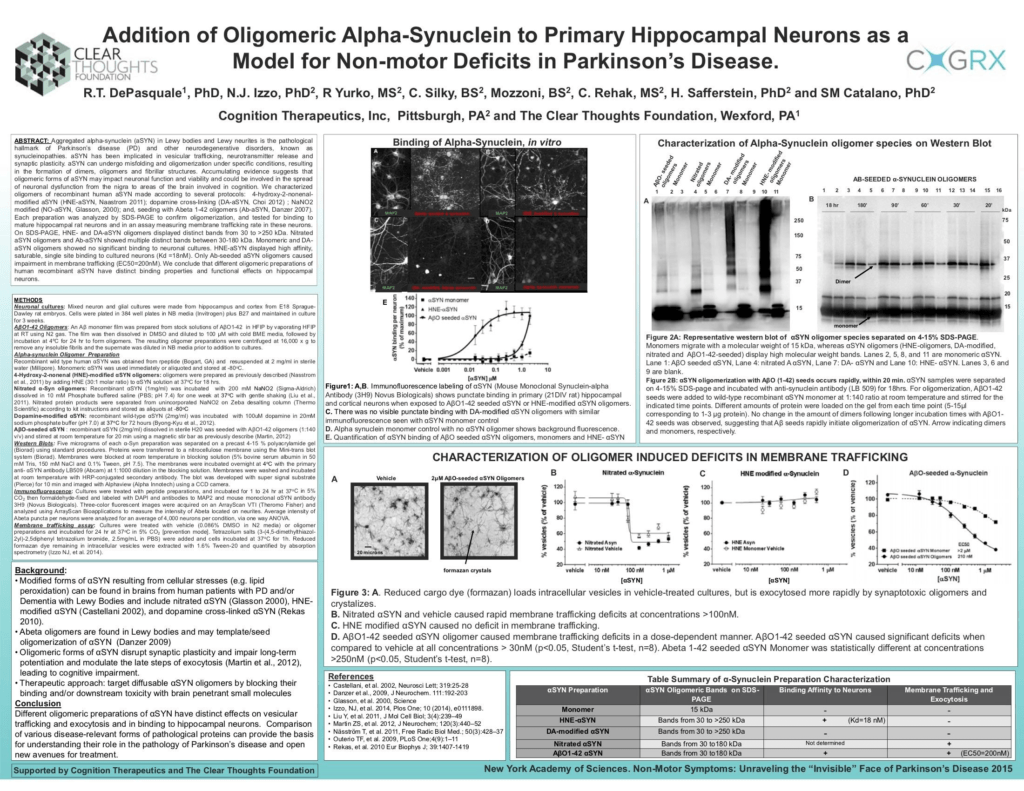 The poster “Addition of oligomeric alpha‐synuclein to primary hippocampal neurons as a model for non‐motor deficits in Parkinson’s Disease” was presented at the conference “Non‐Motor Symptoms, unraveling the invisible face of Parkinson’s disease on April 27th at the New York Academy of Sciences in New York City.

In healthy people, alpha synuclein protein plays an important role in the release and recycling of synaptic vesicles carrying neurotransmitter, facilitating communication between two brain cells. Alpha‐synuclein protein accumulates in the brains of patients suffering from dementia resulting from Parkinson’s disease and Dementia with Lewy bodies. Under specific conditions of cellular stress, alpha‐synuclein protein can form “oligomers” which by definition are molecules formed from a few smaller (identical) molecules joined together. Alpha synuclein oligomers are believed to be toxic to brain cells (neurons) and cause neuronal damage and death by binding to brain cells and disrupting communication between brain cells. Several conference attendees asked questions about these findings related to the toxic forms of alpha synuclein protein and how these findings can be translated into discovering new therapies for neurodegenerative diseases.

The poster shows that these experiments measuring the impact of toxic forms of alpha synuclein on the rate of movement of vesicles inside brain cells are reliable, robust and have a wide dynamic range. This means that this experiment can be used reproducibly to search for molecules that stop the toxic effects of alpha synuclein oligomers on brain cells: in the presence of the effective drug, the oligomers should not bind to brain cells (Fig. 1) and will have no effect at all on vesicle movement inside the cell (Fig. 3). When an experiment is suitable for use in searching for drug molecules, its called an “assay”, and the experiments described in this poster represent the first ever description of assays designed to find effective drugs for alpha‐synuclein dementias like Parkinson’s dementia or Dementia with Lewy bodies. These results will be published in a peer‐reviewed journal and shared with the scientific community.

The Donald Jameson Jr. Fellowship support has allowed me to learn from the experienced scientists at Cognition Therapeutics Inc. about the process by which these assays are designed and quantified. As a result of this training, I designed and characterized these ground‐breaking assays in collaboration with them. In the future, I hope to be able to use these assays to identify drugs capable of stopping dementia.

Explanations of the findings in the poster

Figure 2A: The second part of the poster shows how cellular stress can cause alpha‐ synuclein to oligomerize. Several oxidizing agents were used to promote alpha synuclein oligomerization. By using a technique called western blotting we can separate proteins based on their molecular weight and detect monomers (single unit) or oligomers (dimers, tetramers). The western blot of alpha‐synuclein protein shows several bands on the gel, indicating oligomer formation.

Figure 3 (A‐D): Addition of alpha‐synuclein oligomers to neurons has a significant effect on trafficking of vesicles across the cell membrane. This experiment measures the rate of exchange of vesicles across the cell membrane. Simply put, a substance is added to the cells, in most cases a dye or a cargo that can be traced when it is taken up by the cell. This substance or cargo changes color once inside the cell and is then loaded within specific structures called vesicles. These vesicles are transported out from the cell. We can measure the rate of exchange of vesicles containing the dye inside the cell and the ones that are transported outside of the cell across the membrane. Figure 3B‐D are graphs showing that some forms of oligomeric alpha‐synuclein protein affect the movement of vesicles in the cell, but others do not. This demonstrates that we can search for drugs that stop the most toxic form of alpha‐synuclein from negatively impacting vesicle‐based communication between cells.