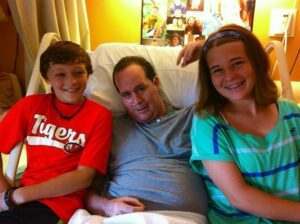 My brother Rich is and always has been the person in the room who makes people smile.  In his 44 years on this earth he has not had one enemy and instead has had more friends than anyone of us could ever dream of having.

In high school and college he was always the life of the party and knew how to make people laugh.  After college he used that talent to make customers feel at ease and he ultimately turned into one of the best overall sales people in Western PA.  More importantly he used that gift from God to begin to raise a family with his wife Erinn.  His daughter Anna – “Pally” to Rich – saw that gift as a young child.  Unfortunately his son Evan own saw glimpses of that gift.  You see Rich was officially diagnosed with “An Undiagnosed Form of Dementia” nearly eight years ago.

Since that time we have gradually witnessed Rich lose his ability to do anything with the exception of smiling.  Rich still smiles even though those around him are crying as we know he likely will not be with us for much longer.  Dementia has taken away my brother’s body and mind but it will never take his kind soul!