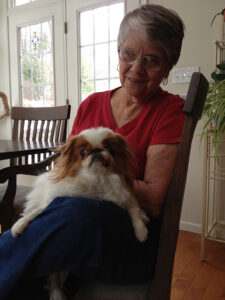 We all have moments of “forgetfulness”. But about 15 years ago I began to notice my mom’s reliance on my step-dad for every little detail…I thought it was sweet how much she always wanted to include him in the conversations, and everything else for that matter. Little did I know that although my mom loved my step-dad dearly, she was doing this out of necessity, not desire. It wasn’t until after my step-dad’s passing 2 years later in 2000, that I realized her inclusions were more a matter of dependence. A neurologist who she had been seeing to understand more about her migraine headaches soon after diagnosed mom with a form of dementia, most likely early stages of Alzheimer’s and prescribed Aricept. Several years later she lost the ability to drive and had increased her dosage of Aricept in addition to starting another drug, Namenda.

Seeing a strong-willed and capable woman, with whom I have the greatest respect, become more and more dependent on our help as the steady decline progressed was agonizing. We tried to help as much as we could until we realized that her condition had worsened to the point that she could no longer remember to eat. Her significant weight loss, increased confusion and then bout with pneumonia were the signs that she needed more help than what we could provide and she moved into Assisted Living. We are grateful that mom’s decline has been slower than it could have been and we contribute that to early ‘diagnosis’ and much family intervention. But then 6 months ago it was determined that mom required more care than Assisted Living could provide and she is now living comfortably in a home dedicated to the care of dementia patients.

While there are so many components of sadness with this ugly disease, the part that breaks my heart the most is that mom feels she is no longer a good mother because of her impairments. And I only hope that she knows deep in her heart and soul that she was and IS still the best mother a daughter could ever have.