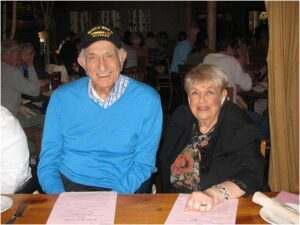 My father, Nathan Safferstein, passed away on March 5,2013 but part of him had  died much earlier.  He had first been diagnosed with Alzheimer’s Disease in 2007. Over the next 5 years he gradually lost many of the qualities that made him such a vital man.  He was a born leader, an avid reader and the center of any group discussion. We could only watch has he withdrew into a world of internal confusion. In 2011, he suffered a massive stroke. The combined effect of AD and the stroke left him dependent upon 24 hour home care to perform life’s simplest functions and keep him safe.

Complications from the stroke lead to my father’s death in March. I feel fortunate that he never entered the final stages of Alzheimer’s Disease that are much harder to witness. Even in his final days, we could still feel some of his warmth and humor.

Nathan Safferstein was a key member of the Manhattan Project and was assigned to eavesdrop on the phone calls of scientists and engineers in Los Alamos, N.M., to make sure no Manhattan Project secrets were leaked. He also delivered top-secret messages and the uranium used in the bomb. He scrawled his signature on the first atomic bomb, called ‘‘Little Boy,’’ which was dropped on Hiroshima, Japan, on Aug. 6, 1945. A second bomb leveled the city of Nagasaki on Aug. 9, and Japan surrendered six days later.