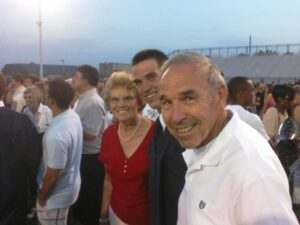 My grandpa, a man that epitomized the definition of hard work, determination and standing true to what he believed and those he cared about, was a man that those lucky enough to know him truly admired. The hardest part of watching my grandpa suffer from Alzheimer’s was knowing that the amiable personality my grandpa displayed would not be there anymore.  It was almost as if part of him was already dead and it made me really have to think back to who he was before the disease took so much from him.  He was a man that we all could take a lesson from and just knowing him made me a better person and it was awfully devastating to watch him suffer from Alzheimer’s.