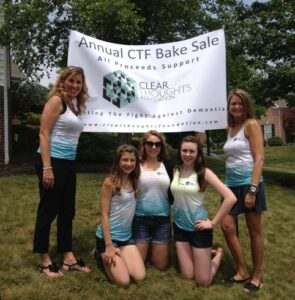 In 2010 Hayley Jameson was instrumental in starting Clear Thoughts Foundation (CTF) to raise awareness to fight Dementia. “As I watched the daily deterioration of my father, who had Frontal Temporal Dementia (FTD) and the pain my mother and our whole family suffered, I made a lifelong pledge to take down the dementia devil. CTF will not rest until the dementia devil himself does. Until then, we have lots of work to do.”

The primary purpose of Clear Thoughts Foundation is to raise funds to discover drugs and novel therapeutics to stop the effects of dementia and eventually end this terrible disease. Hayley’s daughter, Chloe Napotnik, along with friends Rachel Felt and Sophia Hudock decided that they would do what they could to help fundraise for the cause. Sophia, who is now a Treesdale resident, states, “The three of us grew up in Tanglewood together and all had an interest in baking so we decided to do something to raise money for the newly formed foundation.” For the past three years they have had a bake sale and to date have raised over $3,400 for CTF. This year will mark the fourth annual sale and the three girls have already been busy raising awareness.

All of the items in the bake sale are 100% homemade and feature over 700 “signature” cupcakes that the three foundation girls personally hand make and decorate. 100% of the proceeds benefit the Clear Thoughts Foundation.