Roll for a Reason Gala Featured in Post-Gazette ‘SEEN’ 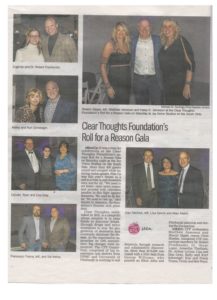 #RiseUp: It was a time for celebration at the Clear Thoughts Foundation’s annual Roll for a Reason Gala on Saturday night at the Jay Verno Studios on the South Side. More than 400 guests mixed and mingled while enjoying casino games. Rise Up was this year’s theme as a call to action to end dementia once and for all. “We need to act faster, raise more money and proceed with relentless passion in this fight against dementia. We need to do better. We need to rise up,” said Hayley D. Jameson, the foundation’s founder and president.

Clear Thoughts, established in 2010, is a nonprofit whose mission is to raise funds to discover breakthrough drugs and novel treatments to stop the progression of dementia and eventually eliminate the disease. As the organization approaches its 10th anniversary, big changes were announced. The CTF Consortium comprised of top researchers and doctors from UPMC and University of Pittsburgh is working to end dementia through research and collaborative discoveries. More than $175,000 was raised with a little help from George Williams, who painted an Elton John and Pittsburgh painting sold during the live auction.